3p.
Read the text about families in different countries.
British and American Families. 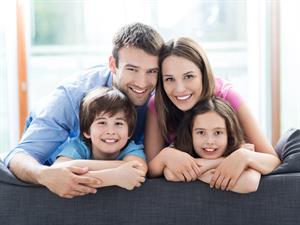 British and American families are small. In fact the populations of both Britain and the USA have stopped growing. A typical family has a father, mother and two children. Grandparents come to visit, but do not usually live with their children.
Most people get married between the ages of 20 and 23 but many marriages end in divorce. This means that both countries have a large number of "single parent families", one father or mother looking after their children alone.
A typical British family has a car, a colour TV set, a washing machine, and a cat or dog as well. They start the day at about 7 o'clock, have breakfast at 8 and are off to work by 8.30. More and more women now go out to work as well as men. Children have lunch at school at about 12.30, and come home at 4 in the afternoon. Their parents are usually home by 6 o'clock, and the family eats together at 6.30 or 7. In the evenings, a father may go to the pub for a drink, or stay at home and watch TV with the others. Children go to bed early, at about 8 o'clock, two or three hours before their parents.
A typical American family has more money than a British family. Many have two or three cars, large modern kitchens and more electrical devices. They eat more meat and spend more on clothes. But their daily programme is nearly the same. Like British children, American children eat lunch at school, come home in the afternoon, and go to bed earlier than their parents.
Choose true or false.
1. A typical British family has a father, mother and two children.
2. Most people get married between the ages of 18 and 20 and live for a long time.
3. American children eat lunch at home.
Atsauce:
http://www.native-english.ru/topics/british-and-american-families
Ieiet portālā vai Reģistrēties
Iepriekšējais uzdevums
Atgriezties tēmā
Nākamais uzdevums
Nosūtīt atsauksmi
Atradi kļūdu?
Sūti mums ziņu!
Lai iesniegtu atbildi un redzētu rezultātus, Tev nepieciešams autorizēties. Lūdzu, ielogojies savā profilā vai reģistrējies portālā!
Ieiet portālā vai Reģistrēties