To speak about a profit, you need the appropriate vocabulary. 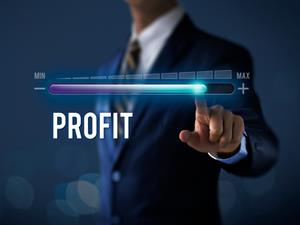 Pursuit - when you try to achieve a plan, activity, or situation, usually over a long period of time;
Acquire - to get something;
Conscious - to know that something is present or that something is happening;
Enterprise - when someone is enthusiastic and willing to do something new and clever, although there are risks involved;
Remunerate - to pay someone for work or services;
Labourer - a worker who uses a lot of physical effort in their job;
Exploitative - using someone unfairly for your own advantage;
Argue - to speak angrily to someone, telling them that you disagree with them;
Critical - very important for the way things will happen in the future;
Measure - to judge the quality, effect, importance, or value of something;
Bonus - an extra amount of money that you are given, especially because you have worked hard;
Innovation - a new idea or method that is being tried for the first time, or the use of such ideas or methods
Examples:
Opponents of capitalism often protest that private owners of capital do not remunerate labourers the full value of their production but keep a portion as profit, claiming this to be exploitative.
However, defenders of capitalism argue that when a worker is paid the wage for which he agreed to work.
That profit provides the capital for further growth and innovation.
Atsauce:
http://study-english.info/
Iepriekšējā teorija
Atgriezties tēmā
Nākamā teorija
Nosūtīt atsauksmi
Atradi kļūdu?
Sūti mums ziņu!